lte-sidelink is an open software library developed in MATLAB by Feron Technologies P.C., that implements the most important functionalities of the 3GPP LTE sidelink interface.

Sidelink is a new LTE feature introduced in 3GPP Release 12 aiming at enabling device-to-device (D2D) communications within legacy cellular-based LTE radio access networks. Sidelink has been enriched in Releases 13 and 14 with various features. D2D is applicable to public safety and commercial communication use-cases, and recently (Rel.14) to vehicle-to-vehicle (V2V) scenarios. In legacy uplink/downlink, two UEs communicate through the Uu interface and data are always traversing the LTE eNB. Differently, sidelink enables the direct communication between proximal UEs using the newly defined PC5 interface, and data does not need to traverse the eNB. Services provided in this way are often called “Proximity Services” (or ProSe) and the UEs suppporting this feature “ProSe”-enabled UEs. 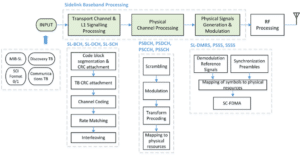 The library provides an (almost) complete implementation of the sidelink physical signals, physical channels and transport layer functionalities described in the 3GPP standard. In addition it provides the neccessary receiver processing functionalities for generating and/or recovering a real sidelink signal which is either simulated/emulated or sent over the air and captured from an SDR board. The code is highly-modular and documented in order to be easily understood and further extended.

The library has many usages. Typical use-case examples are the following:

Current Status: The library is freely and openly available in Github (https://github.com/feron-tech/lte-sidelink). New features and functionalities will be added in the next few months. A real-time software modem based on the above library and running in typical GPP hosts is also under development. The development of the library has been partially supported by EU Project FLEX-D.s

We use cookies on our website to give you the most relevant experience by remembering your preferences and repeat visits. By clicking “Accept All”, you consent to the use of ALL the cookies. However, you may visit "Cookie Settings" to provide a controlled consent.
Cookie Settings Accept All Read More
Manage consent

This website uses cookies to improve your experience while you navigate through the website. Out of these, the cookies that are categorized as necessary are stored on your browser as they are essential for the working of basic functionalities of the website. We also use third-party cookies that help us analyze and understand how you use this website. These cookies will be stored in your browser only with your consent. You also have the option to opt-out of these cookies. But opting out of some of these cookies may affect your browsing experience.
Necessary Always Enabled
Necessary cookies are absolutely essential for the website to function properly. These cookies ensure basic functionalities and security features of the website, anonymously.
Functional
Functional cookies help to perform certain functionalities like sharing the content of the website on social media platforms, collect feedbacks, and other third-party features.
Performance
Performance cookies are used to understand and analyze the key performance indexes of the website which helps in delivering a better user experience for the visitors.
Analytics
Analytical cookies are used to understand how visitors interact with the website. These cookies help provide information on metrics the number of visitors, bounce rate, traffic source, etc.
Advertisement
Advertisement cookies are used to provide visitors with relevant ads and marketing campaigns. These cookies track visitors across websites and collect information to provide customized ads.
Others
Other uncategorized cookies are those that are being analyzed and have not been classified into a category as yet.
SAVE & ACCEPT
Powered by