xG Cell Insight, is a fully flexible 4G-LTE radio access monitoring system, utilizing low-cost SDR hardware and software code running on general purpose computing equipment. It is based on the SDR (SOFTWARE DEFINED RADIO) TECHNOLOGY, which enables the development of end-to-end telecommunications platforms (i.e. comprising both the S/W application and the radio transmitting and receiving system), built entirely on S/W and general purpose H/W. At the core of the system lies:

Use cases: xG Cell Insight scope is quite broad. It was primarily designed as a cost-efficient solution to monitor 4G mobile networks, especially at challenging conditions (e.g. crowded events). Besides that, it could be also used by academia for education purposes and by research groups as a means to accelerate their research.

Current Status: A product prototype has been recently tested and validated, within the context of a large European R&D project (http://www.flex-project.eu/). In particular, three different private LTE networks have been tested, sopen-source OpenAirInterface Software, another one based on a commercial small-cell provided by ipAccess and Sirran, and thirdly another SDR-based solution provided by AMARISOFT eNB/EPC software. Local live 4G cells have been also decoded. In FLEX-D, the probe functionalities have been enhanced in order to use it as a tool for identifying non-occupied LTE resources, which could be potentially used for underlying D2D communications within a network supporting both cellular and direct access.  Two approaches for blindly detecting used/unused LTE resources have been applied. The first is based on a “protocol-level” LTE DL L1 signalling sniffer which recovers UL scheduling information from broadcast L1 messages sent by the LTE eNB, whereas the second is based on a “signal-level” LTE UL filter-bank based sensor/energy-detector, which operates completely blindly. Indicative results for both the “protocol”-based and “signal-processing”-based probe components are shown in associated figures: 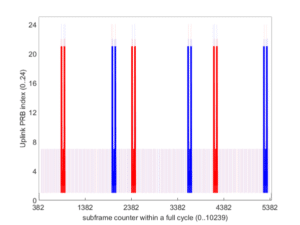 We use cookies on our website to give you the most relevant experience by remembering your preferences and repeat visits. By clicking “Accept All”, you consent to the use of ALL the cookies. However, you may visit "Cookie Settings" to provide a controlled consent.
Cookie Settings Accept All Read More
Manage consent

This website uses cookies to improve your experience while you navigate through the website. Out of these, the cookies that are categorized as necessary are stored on your browser as they are essential for the working of basic functionalities of the website. We also use third-party cookies that help us analyze and understand how you use this website. These cookies will be stored in your browser only with your consent. You also have the option to opt-out of these cookies. But opting out of some of these cookies may affect your browsing experience.
Necessary Always Enabled
Necessary cookies are absolutely essential for the website to function properly. These cookies ensure basic functionalities and security features of the website, anonymously.
Functional
Functional cookies help to perform certain functionalities like sharing the content of the website on social media platforms, collect feedbacks, and other third-party features.
Performance
Performance cookies are used to understand and analyze the key performance indexes of the website which helps in delivering a better user experience for the visitors.
Analytics
Analytical cookies are used to understand how visitors interact with the website. These cookies help provide information on metrics the number of visitors, bounce rate, traffic source, etc.
Advertisement
Advertisement cookies are used to provide visitors with relevant ads and marketing campaigns. These cookies track visitors across websites and collect information to provide customized ads.
Others
Other uncategorized cookies are those that are being analyzed and have not been classified into a category as yet.
SAVE & ACCEPT
Powered by